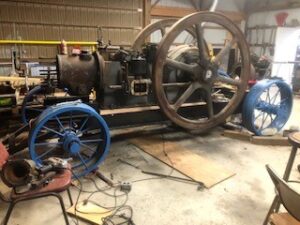 The 25Hp Superior Oil Well Engine was donated to the Friends of the Thumb Octagon Barn by Gary Sutherby of Leonard, MI on September 16, 2019. The engine was given to Gary by a friend who was going to get it running, but could not and asked Gary if he would like it. Gary took ownership and for a few years it just sat idle. He then decided that he did not want to take on the task of repair and donated it to the “Friends”. This engine was used to operate oil wells in Oil City, Michigan.

The next task was to get it from Leonard to Gagetown. Jerry Bartnik of Bartnik Service donated his time and equipment. A pay loader was used to lift the engine onto the flat bed trailer. When Jerry arrived at the Thumb Octagon Barn, he used his wrecker to set the 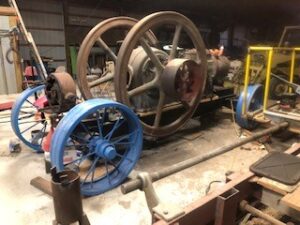 engine on the cart made by Wayne Lenton and Jerry Meredith. (story below*)

This engine was made in Springfield, OH, around 1925. These were made until around 1956 when the Superior Engine Company sold out and then the company was sold again in 1969. No more information is available after that date. This engine could run up to 2 dozen oil wells at one time. This is a 2 cycle engine, which hits on every stroke which forces air in to move the piston, which then forces air for the next stroke. This is one of a kind as most of these engines were 4 cycles.

We were fortunate that Dave Babcock located a booklet on this particular engine which helped with the restoration project.

Gerald Auten was asked “Why do we want one of the engines at the Thumb Octagon Barn?” Gerald responded that there are very few of these oil engines still around and very few people in the United States who have the skill and knowledge to restore it. It will be able to operate some of our larger equipment such as the Veneer Mill. Our next goal is to find a clutch to hook it up to the Veneer Mill.”

*Work started on this project in the spring of 2020. Wayne Lenton and Jerry Meredith took axles out of an old threshing machine to make the cart to move the engine, as it weighs around 5,000 pounds. Wayne painted the cart when it was completed. 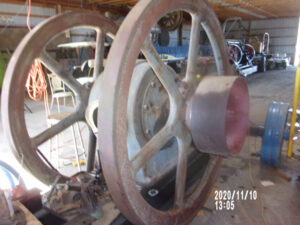 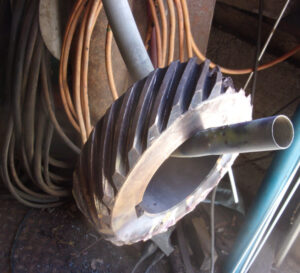 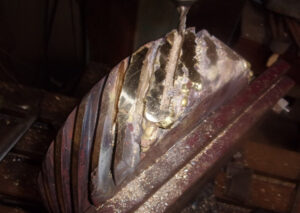 A decision was made to repair the gear ourselves. There are 26 teeth in the gear and 15 were ruined. Gerald welded a jig for the mill and then welded the teeth in the gear. He had to make precise cuts to make this work. The timing shaft was bent which had to be built up and cut down. To check the gear, we turned the shaft. Mark Battle turned the fly wheel to be sure the gear was okay.

Wayne worked on the mag. Gerald Auten made parts for the mag. They hooked up the oiler with ¼ inch copper tubing, which had to be replaced.

Wayne and Paul Deo worked on the 6 inch exhaust pipe. Lewis Martin and Jerry Meredith helped to weld it. Wayne also made a flange to hook the exhaust pipe to the engine. On a Monday when the Barn had closed due to the state requirements of the pandemic, Wayne & Gerald took the pipe to Gerald’s shop and finished welding the pipe. Wayne welded the carburetor back on which was cut in half. A pulley was installed on the fly wheel. 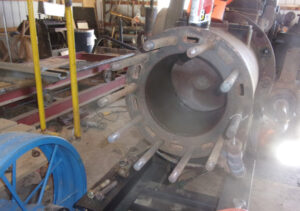 Wayne said it was “A fun project to work on, but everything was heavier than most other projects. It was an interesting experience.”

Jerry Bartnik said “It is a pleasure to always help the Thumb Octagon Barn. I’ve been helping since the very first year when the barn roof was repaired.”

Gary Sutherby has donated his Rumley Steam Engine for many years to operate the sawmill during School Tours and Fall Family Days.