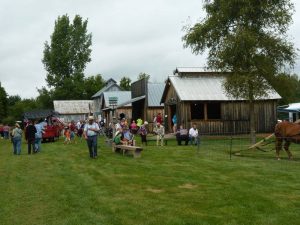 The Cider Mill was a traditional sight in many Midwestern and Northeaster US farm neighborhoods. Apple trees are quite common in parts of our country, partly due to John Chapman (1774-1845), also known as Johnny Appleseed.  Appples have many uses.  One such use is converting apples to juice. It takes approximately 14-16 pounds or 1/3 bushel of apples to make one gallon of cider.

The 1914 cider press was manufactured by the Hydraulic Press Mfg. Co. in Mount Gilead, Ohio.  It was originally used in the Ruth, Michigan area and donated to the Thumb Octagon Barn in 2014 by Jim Hunter and Roy Reinke.  Running the hydraulic press takes a 4hp to 6 hp hit and miss gas engine. Electric motors were quite uncommon in 1914. 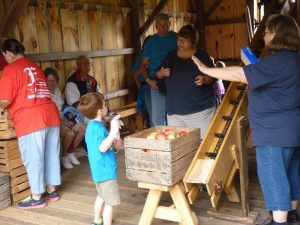 The building (18′ by 30′) was donated by the Orvil Beecher family and moved here from the Caro area in 2011.  It was originally a granary, with corn cribs on the sides and a milling area in the center and dates back about the same time as the Cider Press.