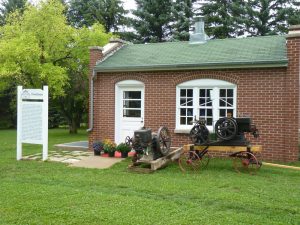 Although we do not have an exact date on the construction of the Powerhouse it is assumed it was about the same time as the house and garage.  We do know that this was a time when, although electric lights glowed in every major city across the country, electrical power to rural areas was non-existent.

There is much speculation as to just what James Purdy had in mind when building the Powerhouse.  In 1895 he began purchasing land east of Richie Road and in 1907 he purchased a tract of land, which included 43 acres of Mud Lake enriched with peat, which leads to the question of why he would purchase marshland that was not farmable?  Our best answer is that he had another goal besides farming in mind. From Cora Purdy’s diary we found an insert on September 19, 1918 that Mr. Purdy traveled to Canada to visit a peat fired power plant. With this excerpt from the diary, knowing the government was promoting rural electrification and taking into account that he was purchasing all this wetland that would provide a huge supply of peat, we’re led to believe that Purdy was already thinking about bringing power to the area.  By 1919 main electric lines were started into the area from Marysville and the State had halted the draining of Mud Lake.  For these reasons it appears that James decided to build the Powerhouse for the farm only.

The Powerhouse is a 12 ft. by 20 ft. building of ornate double brick construction with the interior walls and ceiling lath and plaster.  A cistern located at the west end of the building held rainwater collected from the roof of the powerhouse.  The water was used for the steam boiler that powered the generator. Purdy had a plan, whereby he would harvest the peat from the lowlands, dry it into brick size cakes and burn it in the steam boiler to power the generator to produce electricity.  Unable to get the fire hot enough, he was forced to abandon this plan for a peat fired power plant.  This unique plan and building design, however was a testimony to James Purdy’s ingenious foresight.  Having failed with his peat fired steam generator, Mr. Purdy converted to a 32-volt DC Delco light system and was self-reliant providing electricity for his personal needs.

Records obtained from Detroit Edison indicate that power came north along the east side of Richie Road in 1937.  It was on January 12, 1938 that James Purdy signed the paperwork to have a pole set at his address, which would bring power to his farmstead. 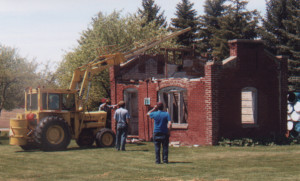 By 2007, the poor condition of the footings and floor made it impossible to restore.  After detailed study it was decided to reconstruct the Powerhouse bringing it back to the original condition.  A 32-volt DC Delco light system and steam generator is operational along with other artifacts of the time.