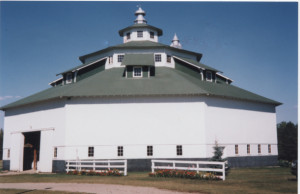 Local craftsman George and John Munro were hired in 1923 to begin construction of the barn. Previously they had been hired by Mr. Purdy in 1919 to build the impressive 15-room house.  The Munro brothers were the only builders in Gagetown at the time, but they were very good.  The Munro’s consulted with Russell Jaggers, Principal and mathematics teacher at Gagetown High School at the time, to help with the mathematical calculations necessary to construct an octagonal building.

George Munro continued to build barns in the area.  Unfortunately, he lost his life in 1940 when he fell from a barn roof during construction.  John Munro moved to Albion, Michigan, where he continued building homes. The most outstanding is Bellemont Manor, currently owned by Albion College and used as its Continuing Education Center.  It was originally built for George Dean, President of Union Steel Products.

The barn was modeled after one Mr. Purdy had reportedly seen while traveling in Iowa.  He admired it so much that he spared no expense in building one of his own.  It has 8 sides each measuring 42 ft 6 in. long and 24 ft. high.  It has a poured cement foundation 4 ft. high that supports a 20 ft. high timber framed wall.  The framing is sheathed with 1 x 12 shiplap siding and encircling the entire building are thirty 10 x12 6-lite windows.  To the tip of the weathervane the barn is 70 ft. tall and covers approximately 3/16 of an acre. 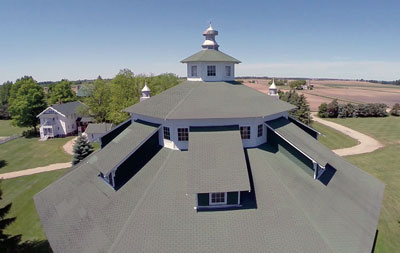 The roof has three different levels, each with a 5/12 pitch.  The lower level and largest area of the roof runs 34 ft to the first vertical wall, a ‘turret-like’ structure rising 8ft -8in. to the second roof level.  From the center of each of these walls projects a dormer 8 ft. wide and 5 ft., 6in. high running 15 ft. back down the first roof level.  There is a 9×12 9-lite window in the face of each dormer and on the second level wall on each side of the dormer.  The second roof level runs 16 ft. to the next vertical wall, an octagon cupola that rises 6 ft. 8 in. to the last roof area.  Each side of the cupola measures 6 ft. 2 in. wide by 6 ft. 8in. high and has a 9×12 9-lite window.  The third roof level runs 8 ft.  The apex of the cupola supports a large steel ventilator.  Evidence of a lightning rod system still exists which was added several years after the barn was constructed. There are 32 windows in the upper level with 288 individual windowpanes in the barn roof, which seems to be positioned to minimize the amount of direct sunlight shining on the stored hay. 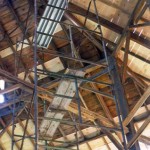 The ground floor of the barn measures 8,600 square feet and the loft area 5,700 square feet for a combined total of 14,300 square feet.  The distance between opposite walls is 102 feet 6 inches.  In the center, on the ground level, there is a 44 ft. octagonal arena, which had a dirt floor but in 2001 was resurfaced with concrete.  Originally on the north side of this arena there was a wood stave silo, which was used for storage of grain for feeder cattle.  It is no longer there, having fallen into such a state of disrepair that a later owner removed it.  There was also a set of scales on the south side that were used to weigh cattle before taking them to the stockyard in Gagetown.  Between the arena and the outside wall of the barn are stables, tack room and grain storage areas.  This area has cement floors and its own ceiling, which is the floor of the 29 ft. mow/loft that follows the circumference of the barn with the exception of the west, and east ends.  These ends were left open to allow access to the interior through 14×14 ft. doors.  A cool breeze always seems to blow freely when these large doors are open.  Looking above the hayloft you can see the remains of a circular track and hay car, used to move loose hay from wagons below and distribute it around the loft area.  Also there are airshafts that were part of a sophisticated ventilation system designed to circulate fresh air around and through the building at all times.  The light filtering down through the dormers and cupola lend a cathedral aura to the interior.

In the summer of 2014, the Thumb Octagon Barn produced this video tour with the late Bob Hirn, who was key in the early days of the preservation efforts.