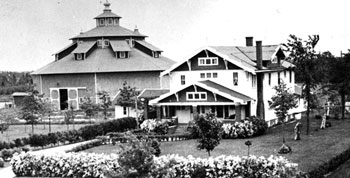 Mr. Purdy was a wise man and the extravagant 15-room house with 8 bedrooms, described as a ‘Craftsman” style bungalow, popular during the early 1920’s, was built first.  The first floor has 6 rooms.  They are a large parlor or the west living room with a natural stone fireplace, the sitting room where the family spent most of their time, a formal dining room, kitchen and the Purdy bedroom with its own attached bathroom.  The upstairs has 7 bedrooms.  There is a very large front bedroom with an attached bathroom, three small bedrooms with closets on the south side of the house and 3 very small rooms on the north side of the house.  A complete bathroom is located in the back of the house on the north side.  There are transoms or small windows over the doors on both levels that can be opened or closed to allow for cross ventilation.  There is a full-unfinished attic and full basement with five rooms. There are porches on all sides of the house except the south side.  The covered front or west porch is very large and the family had frequent dances on this porch.  The north porch is special as it is a porte-cochere, (a covered porch over a driveway at the entranceway to the home).  This home has some special features not found in your typical farmhouse.  Masons from Bad Axe formed a natural stone fireplace and brick pillars on the porte-cochere and front porch. A large built-in icebox in the kitchen is still in place.  The Purdy’s moved into their new home on Richie Road on May 19, 1922.