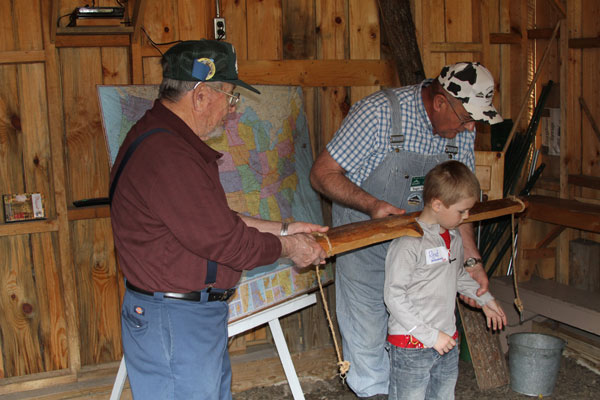 In the fall of 2009 our volunteer crew put in the foundation for this 18 ft. x 24 ft. building.  During the winter they built the sidewall framing, cut the roof rafters and sized the boards for the siding and roof sheathing.  All this lumber was cut during previous Fall Family Days demonstrations at the Saw Mill on site from white pine logs that were donated to the “Friends”.  The structure was needed for housing an evaporator used to demonstrate syrup making.  The evaporator had been rebuilt so that it could moved with a fork lift from storage to out of doors for demonstrations during School Tours and Fall Family days.  Several years of moving was causing leaks and once in the Sugar Shack it would no longer need to be moved.  The evaporator had been acquired in 2002 from the estate of Frank and Bertha Achenbach of Unionville, Michigan and is being used to demonstrate the making of maple syrup during School Tours in May and the making of sorghum syrup during Fall Family Days in September.