The history of the Thumb Octagon Barn begins back in 1869 when James Luther Purdy was born in Pontiac, Michigan.  In 1890, at the age of 21, James joined his father at the Bank of P.C. Purdy and Son in Gagetown, Michigan.  Soon after, he met and, in 1894, married Cora Ozella Warner of Cass City and they moved into their home above the bank in Gagetown.  They had two daughters: Florence (1900-1985) and Carolyn (1907-1969).  Carolyn Purdy Wilson had three sons.  George Wilson is still living in the area.

James demonstrated much natural ability in the banking profession and soon became its President. Under his leadership the bank flourished and was one of two banks in Michigan to remain solvent during the Great Depression.  Post depression Americans had become very leery of banks so James Purdy met with other bankers in Lansing and formulated a plan through which they believed faith could be restored to the banking system. They felt that the Federal Government should insure the investor’s money.  Mr. Purdy traveled to Washington to talk to Michigan Senator Arthur Vandenburg (Grand Rapids) who introduced the bill into the Senate.  It gained the support of President Franklin Roosevelt and led to the formation of the Federal Deposit Insurance Corporation (the FDIC).

While traveling through Iowa during the early part of the century James Purdy saw an octagonal barn and was determined to build a similar structure.  In 1895 he bought a 40 acre parcel of land just east of Richie Road.  Eventually he purchased a total of 560 acres, which included the 40 acres where the buildings now stand.

Cora Purdy kept 59 years of wonderful diaries from 1895-1954 and her grandson, James Purdy Wilson of Caro, Michigan, has preserved these. He donated these to the “Friends” and they have been extremely valuable in documenting events as they relate to the early days of life at the Octagon Barn Complex.

During subsequent years the farm had a number of owners and during that time parcels of land were sold off.  By 1990 the deed for the 80-acre parcel including the buildings was in the hands of the Pinney State Bank of Cass City (now a part of Chemical Bank).

On October 10, 1991 the State of Michigan Department of Natural Resources (DNR) purchased the 80 acres from the bank for $49,500.  The DNR was interested in the land because it connected two large parcels that were already a part of the Gagetown State Game Area.  However, the DNR was not interested in the buildings. By this time they were in total disrepair and they looked at them as a liability and stated that they be sold and removed or simply demolished.

Upon learning of this, a group of local citizens organized.  They knew that by having it on the historic registry it could not be demolished.  Through contacts at the state level, they found former owner Zsigmond Egey-Samu had placed the barn on the Michigan State Registry of Historic Sites on August 12, 1977 called the “Round Barn”.  At the same time a Tuscola County organization known as Tuscola 2001, was taking an active interest in the barn. On January 31, 1994 the “Tuscola 2001” committee hosted a meeting and this was the beginning of a formal effort to “Save the Barn. 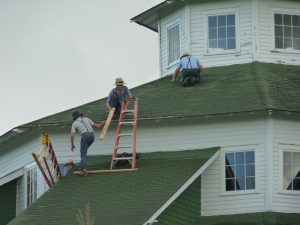 With negotiations still going on with the DNR, the committee forged ahead and on August 20, 1994, they hosted the first Octagon Barn Festival in Gagetown. Their purpose was to draw attention to the project and raise money to further their cause.  On October 11, 1994, the committee changed its name to “The Friends of the Thumb Octagon Barn” and planned more fundraisers.  The ‘Friends’, working with the DNR officials to obtain rights to use the land and restore the buildings, ultimately received a three year Memorandum of Understanding from the DNR on January 18, 1996.  Under this agreement the DNR allowed the Friends to commence restoration of the buildings, gave them control of approximately 8.2 acres of land and permission to hold events on the site.  In return the “Friends’ had to provide liability insurance for the property and put together a twenty-five year plan outlining their goals and objectives for the site.  The paperwork to acquire corporate non-profit status was completed and on August 19, 1997 they became a 501(c)3 tax-exempt non-profit corporation.

Once the original buildings at the site were restored to the point that they were secured from further deterioration, the Friends set a goal to develop an Agricultural Museum for the Thumb Area.  The original plan was to restore each building on the site and to display period appropriate items in each to tell a story.